skip to main | skip to sidebar

Workshop with All China Environment Federation

On February 4 the North American Commission on Environmental Cooperation (CEC) released a draft report harshly criticizing the export of spent lead acid batteries (SLAB) from the U.S. to Mexico.   The CEC, which was created by the North American Free Trade Agreement (NAFTA), includes representatives from the U.S., Mexico and Canada.  The report found that between 2004 and 2011, U.S. net exports of SLABs to Mexico increased by 449 to 525 percent.  It is estimated that 20 percent of all lead acid batteries in the U.S. eventually end up in Mexico for recycling through methods that are poorly regulated.  Activists argue that U.S. lead recyclers emit more than 30 times as much lead from their Mexican plants than from similar plants they operate in the U.S.  A copy of the CEC’s report Hazardous Trade? An examination of US-generated Spent Lead Acid Battery exports and secondary lead recycling in Mexico, the United States and Canada is available online at: http://www.cec.org/Page.asp?PageID=924&SiteNodeID=1075.

The International Fund for Animal Welfare reported on February 6 that the Japanese government has provided nearly $400 million in subsidies in recent years to prop up the country’s declining whaling industry, including funds diverted from tsunami relief.  The report argues that whaling is a dying industry in Japan and that the country would be better off economically by abandoning an industry that now employs fewer than 1,000 people.  The report notes that the industry plans to ship only 2,400 tons of whale meat this year, less than half the level of 2011.  Japan has defied an international moratorium on commercial whaling by killing more than 14,000 whales for what it calls “research purposes” since the moratorium took effect in 1986.  Hiroko Tabuchi, Japan Subsidy For Whaling Is Challenged,” N.Y. Times, Feb. 7, 2013, at A12. The report, The Economics of Japanese Whaling, is available online at: http://www.ifaw.org/sites/default/files/economics-of-japanese-whaling-japan-ifaw.pdf.

On February 5 the journal Environmental Health Perspectives (EHP) published a report advocating increased emphasize on preventing cancer through reducing human exposure to toxics in the environment and workplace.  The report, for which I am one of the coauthors, is an outgrowth of the World Health Organization (WHO) conference I participated in during March 2011 in Asturias, Spain.  The other authors include top epidemiologists and public health experts from six countries.  The article reports that nearly 13 million new cases of cancer and 7.6 million cancer deaths occur each year.  It notes that the cancer policies of most countries focus almost exclusively on early detection, diagnosis, and treatment with scant attention to primary prevention through reducing environmental and occupational exposures to carcinogens.  The article advocates for the development of an “evidence-based global vision and strategy for the primary prevention of environmental and occupational cancer.” The article, which is entitled “Environmental and Occupational Interventions for Primary Prevention of Cancer: A Cross-Sectorial Policy Framework,” is available online at: http://ehp.niehs.nih.gov/2013/02/1205897/.  EHP is a monthly journal of peer-reviewed research and news published with support from the National Institute of Environmental Health Sciences, National Institutes of Health, U.S. Department of Health and Human Services.
On February 6 the British Medical Journal Open published a study showing that exposure to ground-level ozone may cause a significant increase in premature births and pre-eclampsia among pregnant women.  Pre-eclampsia is a condition involving increased blood pressure that can cause seizures and strokes endangering the lives of women and their babies.  The study was based on a review of the medical records of 121,000 Swedish women. It found no evidence of a relationship between ozone exposure and fetal growth.  When President Obama directed EPA to delay strengthening of the U.S. national ambient air quality standard for ozone in 2011, he pledged that a new standard would be adopted in 2013.  The study, which is authored by David Olsson, Ingrid Mogren and Bertil Forsberg, is entitled “Air Pollution Exposure in Early Pregnancy and Adverse Pregnancy Outcomes: A Register Based Cohort Study.”  It is available online at: http://bmjopen.bmj.com/content/3/2/e001955.full

China’s new leadership is scrambling to respond to a variety of challenges, including levels of winter air pollution that have made the ambient air at times seem like an airport smoking lounge.  China’s state-owned oil company Sinopec announced last week that it would increase by 50 percent (to $4.8 billion) its annual investment to improve the quality of petroleum produced at its refineries.  Tom Orlik, Crude Treatment by Sinopec, Wall St. J., Feb. 6, 2013, at C14. Last week China’s State Council pledged to reduce the income gap between rich and poor in China by increasing taxes on corporations and the wealthy and spending more on programs to assist low-income groups.  China’s National Bureau of Statistics estimated last month that levels of income inequality in China were almost as bad as in the U.S. (Gini coefficient of .47 in China versus .48 in the U.S.).  Independent estimates give China a much greater level of income inequality than in the U.S. (Gini coefficient of .61).  Liyan Qi and William Kazer, China Tackles Income Divide, Wall St. J., Feb. 6, 2013, at A8. Hewlett Packard announced last week that it would follow Apple’s lead in improving working conditions in Chinese companies that are part of its supply chain.

On February 7 representatives of nine northeastern states participating in the Regional Greenhouse Gas Initiative (RGGI) proposed new limits on greenhouse gas (GHG) emissions for 2014.  The new limit of 91 million tons is a 45 percent reduction from this year’s allowed level of 165 million tons, but it reflects the actual level of current emissions.  The level of GHG emissions allowed in the future will decline by 2.5 percent annually.  This is expected to increase the price of RGGI emissions allowances from the current $1.93/ton by $2 per ton each year until it reaches $10/ton in 2017.  The states participating in RGGI are Connecticut, Delaware, Maine, Maryland, Massachusetts, New Hampshire, Rhode Island, and Vermont.  Felicity Barringer, States’ Group Calls for 45% Cut in Amount of Carbon Emissions Allowed, N.Y. Times, Feb. 8, 2013, at B4.

Citing higher costs and extended delays, Centrica on February 4 canceled its option to own 20 percent of four new nuclear power plants to be built in Britain.  France’s state-owned EDF, which is planning to build the plants, is now in negotiations with China’s Guangdong Nuclear Power Corporiation to pick up Centrica’s interest.  The following day the U.S. electric utility Duke Energy announced that it would decommission its Crystal River nuclear power plant rather than paying more than $3 billion to repair it. The World Nuclear Industry reported in July 2012 that 59 nuclear power plants were under construction, 44 of them in Brazil, Russia, India and China.  Thirteen of these plants have been listed as “under construction” for 10 years or more.  Liam Denning, Best to Go Nuclear in the BRICS, Wall St. J., Feb. 6, 2013, at C14.

On Monday I was in Boston to give a demonstration of the electronic version of my Environmental Regulation casebook at Suffolk University Law School.  I flew up to Boston from D.C. on Monday morning and had lunch with Chip Price, vice president and general manager of VitalSource (http://www.vitalsource.com/pages/home.aspx), the company that digitized my casebook for Aspen Publishing (Chip also by coincidence happens to be my brother-in-law).  We discussed the latest developments in electronic textbook publishing, which helped me prepare for my presentation at Suffolk later in the afternoon. After having dinner with my Aspen editor on Monday night, I flew back to Baltimore on Tuesday morning.

Today’s New York Times has an article by environmental reporter John Broder describing his failed attempt to drive in freezing weather from Washington to Boston in an all-electric Tesla S.  Broder’s plan was to recharge the vehicle at the 480-volt Supercharger stations Tesla installed in December at I-95 service plazas in Newark, Delaware and Milford, Connecticut.  Broder notes that the car is a “technological wonder” that “has won multiple car-of-the-year awards and is, many reviews would have you believe, the coolest car on the planet.”  However, after a stop in New York City, Broder had a scare when the car nearly did not make it to the Milford supercharger station on its remaining charge.  After charging it there Broder then drove 79 miles to Groton and spent the night at a place where he did not try to charge the car overnight.  The next morning in 10-degree weather Broder had to recharge the vehicle using normal power and did not charge it long enough to make it back to the Milford supercharger, thus necessitating a tow.  John M. Broder, Stalled Out on the Electric Highway, N.Y. Times, Feb. 10, 2013, at A11.  Alternative energy haters already are seizing on this story to denounce electric vehicles.  Moral of the story: Tesla owners should not plan lengthy road trips, particularly in very cold weather that reduces battery range.  When I ordered my Tesla in December it was not with any plans to drive it to Boston, but rather to use it for my commute between D.C. and Baltimore.  When I want to go to Boston, I simply will do what I did on Monday (and have always done), which is to fly there. 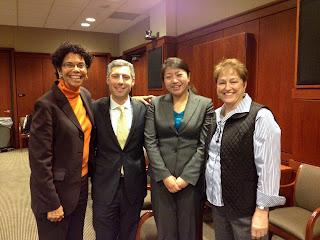 On Wednesday Professor Zhao Huiyu gave a guest lecture on Chinese environmental law in my Global Environmental Law seminar.  Following the class, Maryland’s Environmental Law Program hosted a farewell wine and cheese reception for Professor Zhao, who will be returning to China this week after a year in residence at the law school.  On Thursday Professor Zhao and I each gave presentations on Chinese environmental law to students in a course being taught jointly at Johns Hopkins University and Nanjing University in China.  The course, which is entitled “Comparison of Environmental Challenges and Governance in China and the United States,” is usually taught via videoconferencing with China.  Because the spring semester has not yet started in China, the students were all in Baltimore with a professor in China participating through Apple’s Facetime program.

On Friday I received approval from U.S. Customs and Border Protection to be a member of their Global Entry Program.  This program designates me as a pre-approved, low risk traveler, who can now avoid lines at Customs when re-entering the U.S. simply by going to a kiosk.  The kiosk will scan my fingerprints to see if that match the fingerprint scan I gave Customs during my interview on February 8.  When driving over the border from Canada or Mexico I can now flash the equivalent of an EZ-Pass card without stopping.  Enrollment in the Global Entry Program also gives me automatic enrollment in the TSA Pre-Check Program that means I no longer will have to remove my shoes, belt, or laptop during domestic travel.  My annual membership fee is being paid by United Airlines as a perk of having achieved 1K status.
Posted by Global E-Law at 4:37 PM

Taking Back Eden: Eight Environmental Cases That Changed the World

Prof. Percival with Ma Jun, Director of the Institute for Public and Environmental Affairs, in Beijing Nov. 8

With Professor Xu in Venezuela

New Casebook Edition to Be Published

Global E-Law
Baltimore, Maryland, United States
While on sabbatical during the 2007-2008 academic year, I began work on a casebook on Global Environmental Law, in cooperation with Professor Tseming Yang of Vermont Law School. During the spring semester 2008 I taught as a Fulbright scholar at the China University of Political Science and Law in Beijing. This university is the home of my friend Professor Wang Canfa, who directs an environmental law clinic and the Center for Legal Assistance to Pollution Victims, an NGO that has been active in seeking judicial redress for China's burgeoning pollution problems. I am now back at the University of Maryland School of Law. During the spring semester 2009 I taught Constitutional Law and a seminar on Global Environmental Law at Maryland. I also served as a visiting professor at Harvard Law School where I taught Environmental Law during the spring semester 2009.